I recently purchased an Apple HomePod Mini off of eBay to add to the ever expanding setup at our home. We already have 6 or so scattered around so adding another should not have been an issue. But, as with all things tech, sometimes it doesn’t go as planned. I plugged in the Mini and it powered up fine and my phone discovered it. I began the setup process and then things went sideways. I got to the “setting up"screen and it just stayed there for as long as I would leave it, even overnight! I checked everything. I made sure I had network connectivity, made sure it was getting a DHCP address, made sure no filtering was catching anything…on and on with the typical troubleshooting for network issues. Still, nothing seemed to solve the issue. I performed multiple resets of the HomePod to no positive result.

Googling brought littel feedback. Then I got deep into some searches and ran across this Reddit article. Since Reddit always tries to force you to use the app when on mobile and doesn’t let you completely read a post before blocking you out I wanted to post my steps here for future reference. This should be better outlined in the Apple troubleshooting steps as it did fix things right up! But, I am lucky to have a Mac to perform these steps. If you are without a Mac I am not sure what the fix action would be.

Step One - Plug the HomePod Mini Into Mac#

I have an M1 MacBook Air and was able to plug the HomePod directly into a USB C port. After the light on the HomePod turned orange I checked finder and say the HomePod connected. Once I clicked ont he device I confirmed that the device had the version 14 OS whereas the rest of the house was on 15.

I then pressed the “Restore HomePod” button and kicekd of the Restore and Update process. I acknowledge the popup to confirm the factory restore and update process: 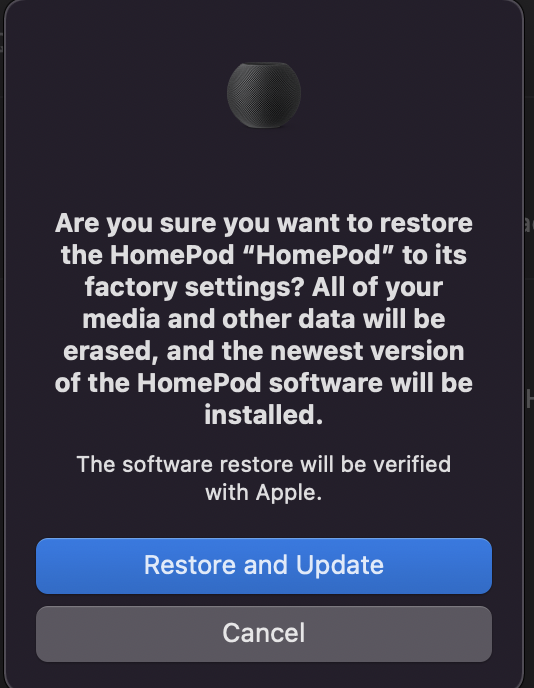 It then let me know that the HomePod Mini would be updated to OS 15.1. Great! Click Next! 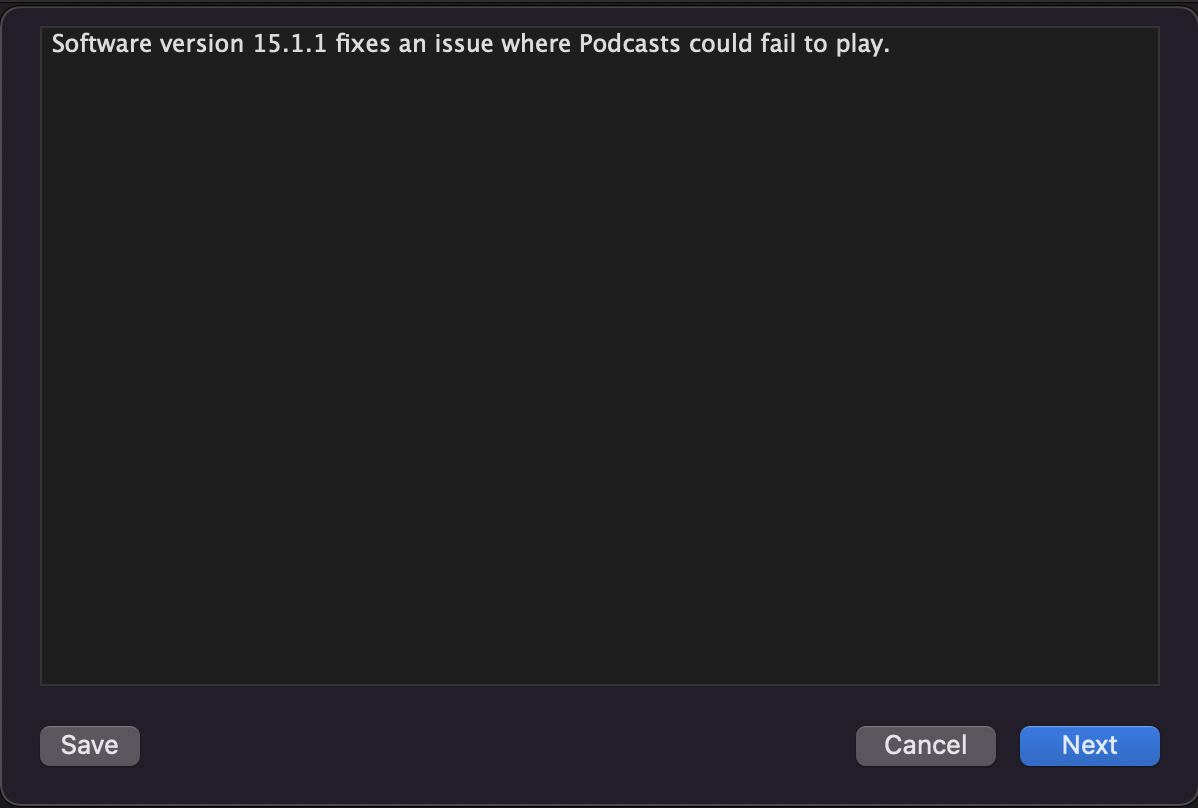 After clicking next your Mac will download the new OS version and begin flashing the HomePod and restoring factory settings: 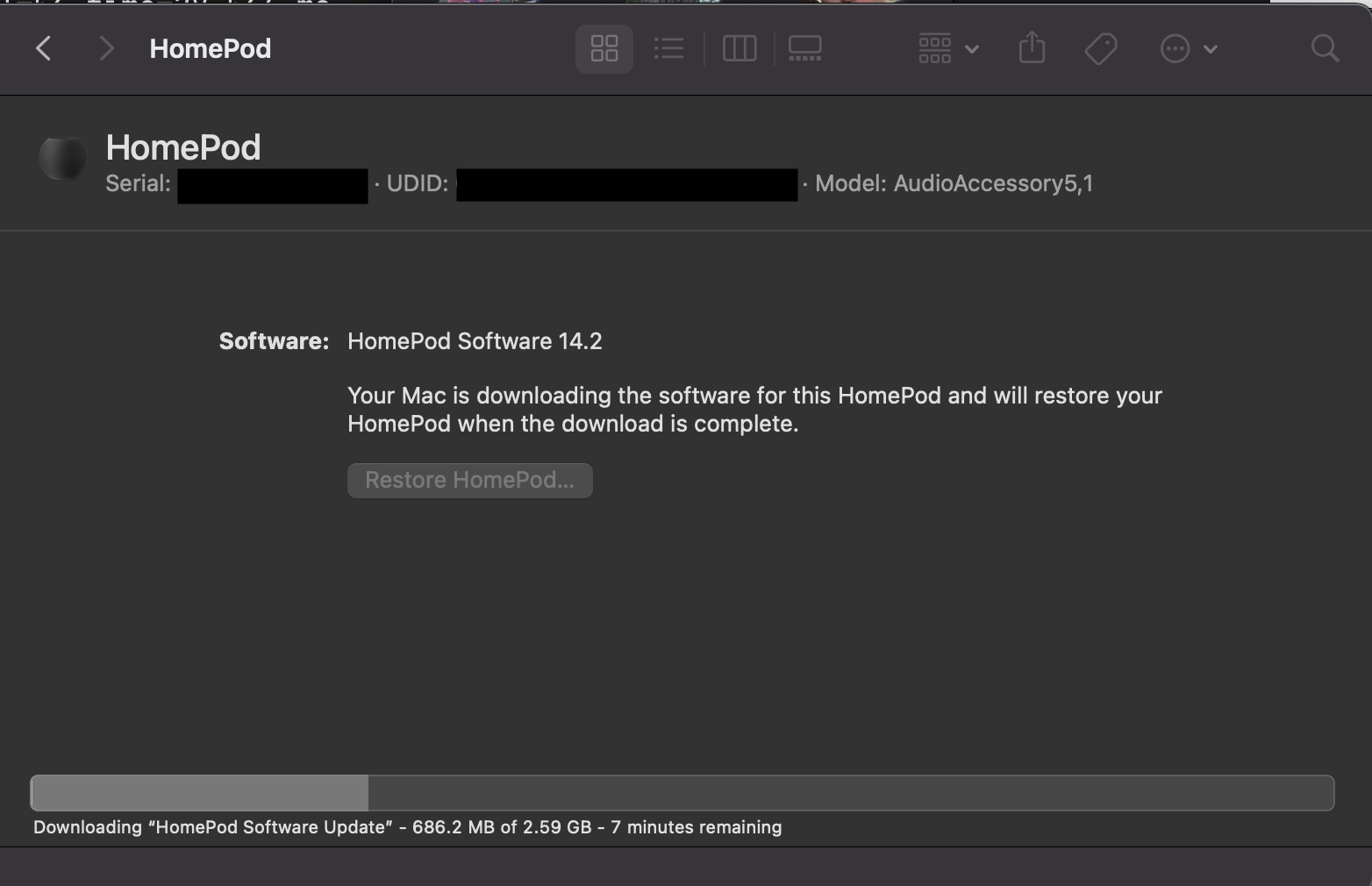 After the process is complete you will receive the following popup: 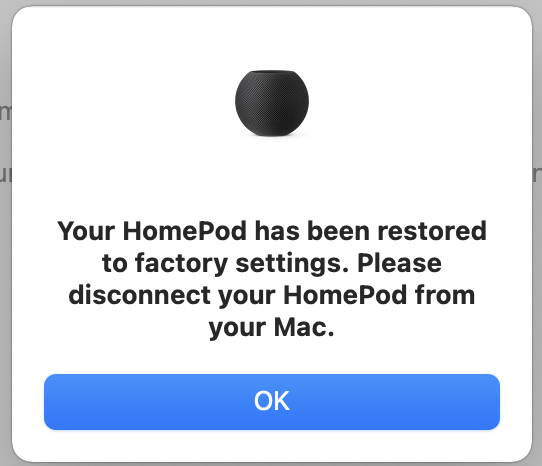 After acknowledging the popup you will see the same screen as at the beginning with the updated OS showing:

That is all! Just eject the HomePod from your system and go through the typical setup process. It worked like a charm for me.

If you happen upon how to perform this is you do not have a Mac I would love to know. Please comment below and I will update the post.

I had this issue as well with two HomePod Minis. I did the above to update to the latest OS (15.2) but that didn’t help. It turned out that my AppleID was locked. Once I realized that and unlocked it (through iCloud on the web) setup was quick. Apple needs to provide an error message instead of letting setup sit stuck for hours without explanation!
Reply to David Nelson

Your post has been submitted and will be published once it has been approved.